The Walls of Ferrara: an itinerary on foot or by bike

16 October 2020
|
By Davide Marino
You are here: Art & Culture > The Walls of Ferrara: an itinerary on foot or by bike

The Walls of Ferrara: an itinerary on foot or by bike

On the walls of Ferrara, you can walk or go by bike, you can jog or just relax after a good lunch. Any hour of the day is good to stop by, any excuse is welcome.

After all, they’ve been standing there, imposing and elegant, for over 500 years — despite events and changes — guarding that jewel of architecture that is the city center of Ferrara, Unesco World Heritage since 1995.

For centuries, they’ve carried out a crucial military and defensive function, protecting the inhabitants of the city from any kind of peril.

Today, the citizens return this service with the same love and attention: the tree-lined alleys and the wide green lawns are all well taken care of, and, altogether, they outline a more than 9 km-long path, featuring also cycle lanes.

The old defensive system is, on the other hand, one of the most complete and varied wall tours in Italy, designed by Michelangelo and being an excellent example of military art. 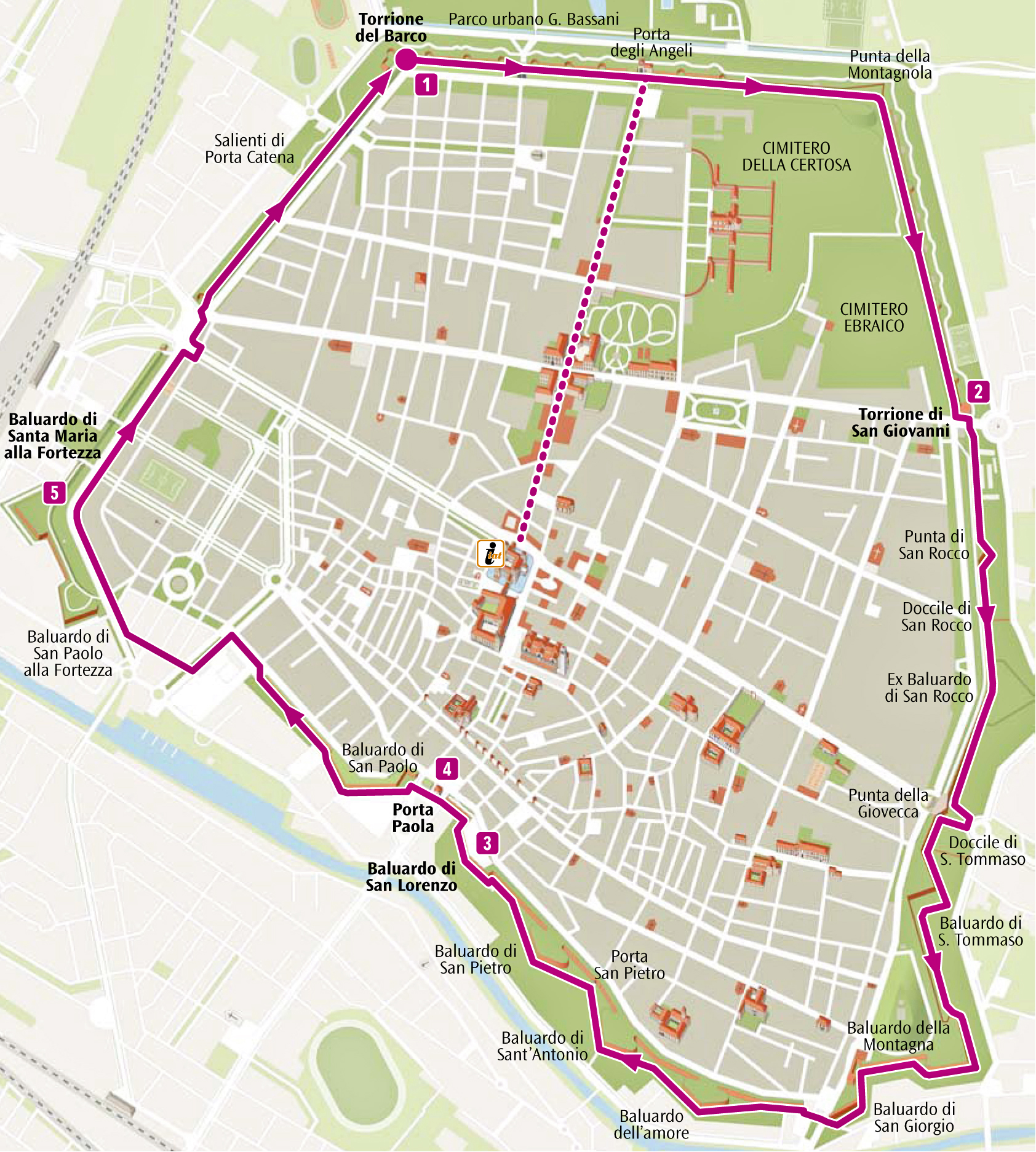 Map of the city walls of Ferrara | Photo © ferraraterraeacqua.it

Today, the walls don’t have that function anymore but nonetheless, they are still an essential reference point within the city landscape. Over time, they’ve turned into a splendid ‘garden’ that, instead of diving people, unites them.

The great urban park dedicated to Giorgio Bassani, just a bit north of Ferrara, is the proof of this: It is the departing point of the cycle lane Destra del Po, which, with its 125 km, cuts into two the entire valley until reaching the Adriatic.
Even though the walls have an ancient and complex origin, four more recent sections can be clearly recognized, all dating back between the 15th and the 17th century.

The first section is the northern part of the wall, featuring the ‘Erculean Addiction’, designed by Biagio Rossetti and built between 1493 and 1505. In the eastern part of the walls is the section wanted by Duke Alfonso I d’Este between 1512 and 1518. Finally, a southern section was built on request of Duke Alfonso II d’Este between 1575 and 1585, whereas the most southern piece was requested by Pope Paolo V between 1608 and 1618, after Ferrara had been annexed to the Papal State, including the new archaeological park Baluardo dell’Amore.

Defensive towers, gunner towers, gates, and passages: You can walk for all their length along the walls and the underlying fortification (longer and less protected by the sun than the walls), glimpsing from time to time some suggestive views on the city. 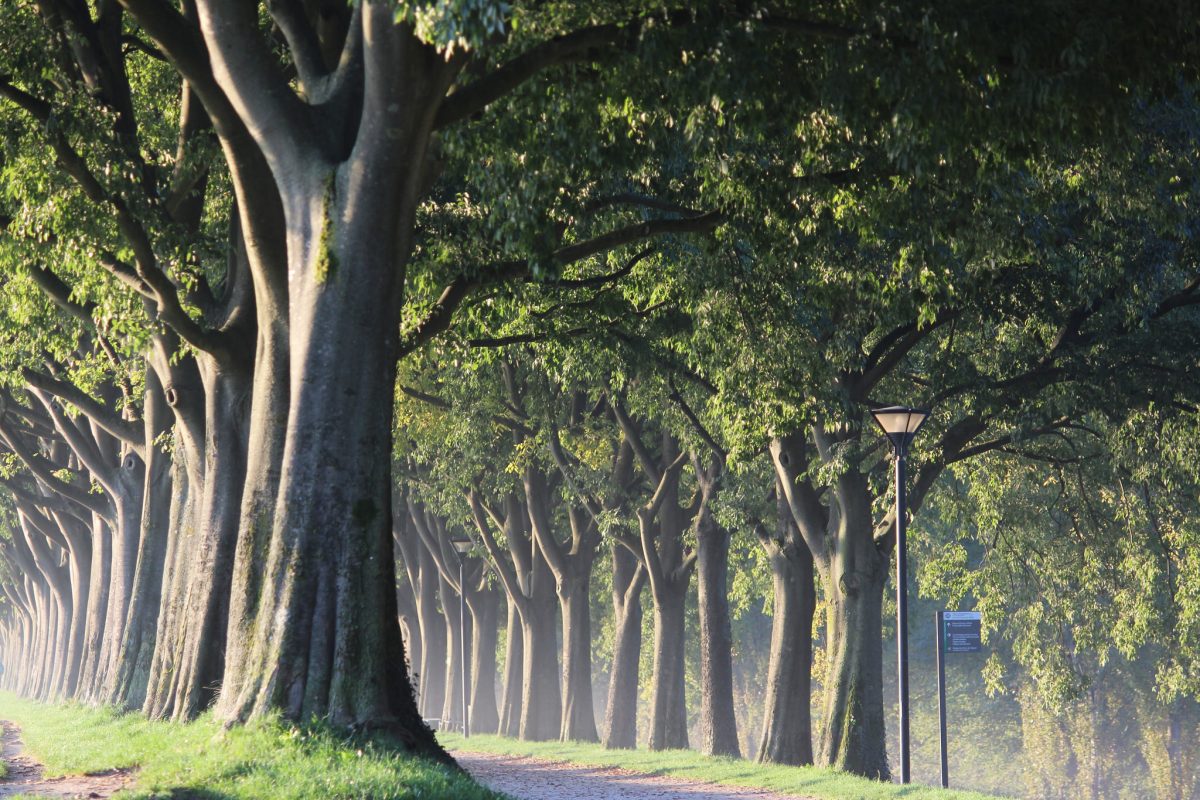 In the trait between the gate Porta Degli Angeli and the Tower of San Giovanni (see the map) you will see on the one side the monumental complex of the Charterhouse, the Jewish Cemetery, and the gardens (among which, noteworthy is Via Delle Erbe, a particular urban campaign enshrined in the heart of the city centre), on the other side the “Urban” Park Bassani (former game reserve of the Este family).

The key point of the wall’s geography and venue of several temporary events, a mention deserves Porta Degli Angeli, better known to the people of Ferrara as “Casa del Boia” (House of the Executioner). Sited at the end of Corso Ercole I d’Este and considered one of the most beautiful gates of the Renaissance period in Europe, according to tradition Cesare d’Este, last duke of Ferrara, crossed it while exiting the city, when its city was ceded to the Papal State.

Thanks to the recent renovation work, visitors can now go up to the top of the gate and have a panoramic view of the city like in the 16th century. 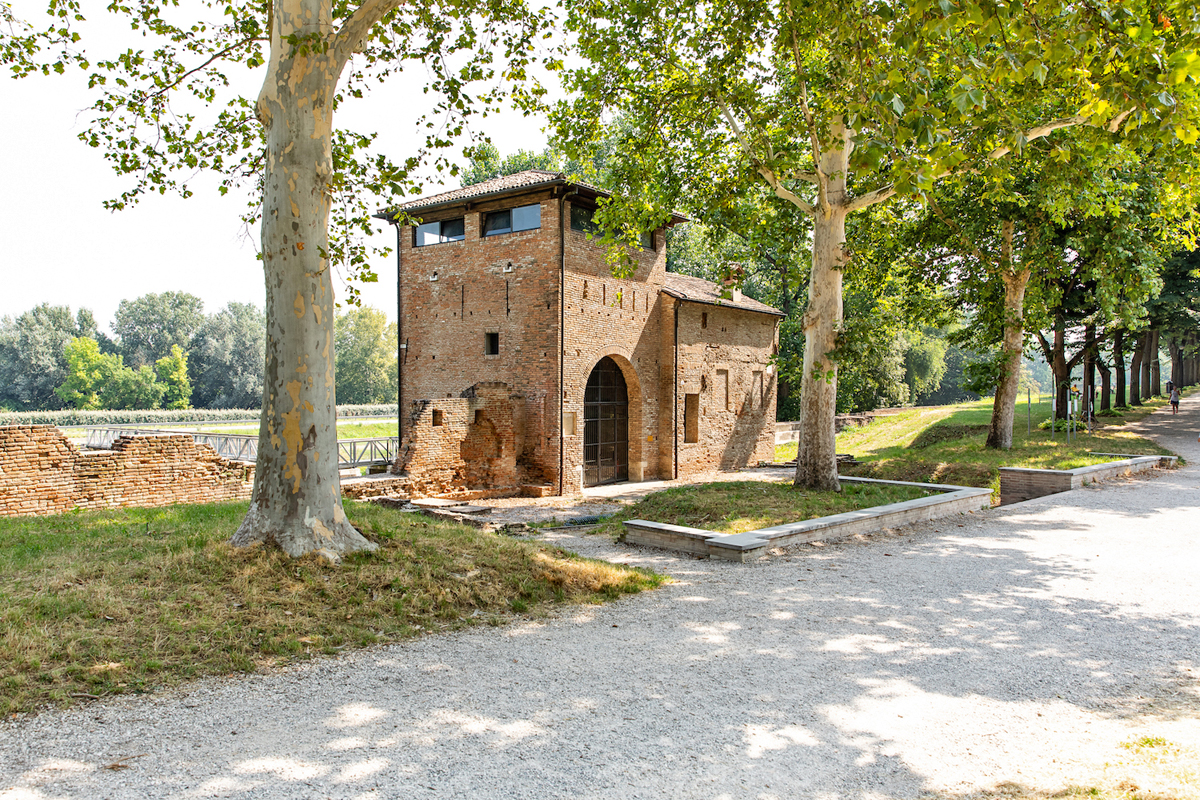 The walls remain an important milestone of Ferrara: not just an imposing witness of a glorious past but rather a lively heart of the city’s social life. In the daytime (usually on Friday), the area of Porta Paola turns into a farmer’s market, rich in local products coming from the surrounding countryside; at night, though, the enchanting Tower of San Giovanni becomes a meeting place for Jazz lovers.

Excitement is what fills the days of the walls in Ferrara, which fades away only at the end of the day, when the city and this important character of Emilia-Romagna history fall asleep, waiting for another day to come.

Ferrara in 3 minutes: Best Things to Do and See

The ‘Ideal Cities’ in Emilia Romagna

The Unesco Art Cities in Emilia-Romagna

From Germany to Italy: Canossa’s dinasty, the Este Dukes and other noble houses of Emilia Romagna