Ravenna is a city that is able to SURPRISE with elegance and discretion. It is a few kilometres away from the Adriatic Sea, hanging in the balance between the East and the West, right in the heart of Romagna.

Seven of its eight World Heritage monuments have been enshrining for more than 1500 years an incomparable treasure: precious tiles narrate through their colour and iconographic combinations the artistic splendour of a city that, between the 5th and the 6th century A.D., was one of the most important centres of the known world.

Ravenna was three times capital (of the Roman Empire, of the Ostrogothic Kingdom, of the Byzantine Exarchate), and behind the illusory plainness of its buildings’ façades it hides an excessive richness of details and stories to listen to, fast bikes whizzing by, ringing bells, and bypassers standing and talking to each other in the main square, the Piazza del Popolo, the civil and social centre of the city. Ravenna may seem like many other cities, but it conceals an extraordinary and unexpected vitality.

Mosaics are always the first attraction, of course, they are the centre of everything, a cross and a joy for this city. There are many itineraries, sometimes also unusual ones. Some people get their soul stolen by the stars of the Mausoleum of Galla Placidia or by the magnificence of the Basilica of San Vitale. Someone gets lost turning around to admire the dome of the Orthodox Baptistery or of the Arian Baptistery. Someone else lets his gaze wander back and forth on the processions of martyrs and virgins of the Basilica of Sant’Apollinare Nuovo and someone else compares the discretion of the Chapel of Sant’Andrea with the grandeur of the Basilica of Sant’Apollinare in Classe.

BUT RAVENNA IS FURTHER MORE…

If all this is not enough, then someone decides to stop in front of the imposing Mausoleum of Theoderic, Unesco World Heritage monument. Someone else searches for a direct contact with history and visits two of the most important archaeological discoveries in Italy of the last century: the Domus of the Stone Carpets and the Ancient Port of Classe.

Ravenna is like an ancient book of stories waiting for curious readers. There is a corner in this city with marked Medieval traits that is deeply connected to Dante Alighieri: here is his tomb, the Basilica of San Francesco, the Old Franciscan Cloisters and a museum dedicated to the Poet. Only a few metres away from this corner, a monumental jewel that deserves to be visited is the Classense Library: the Aula Magna and the immense cultural heritage inside its walls astound everyone.

Ravenna is A MOSAIC OF BEAUTY AND ART indeed, and there are so many things to see and to do: a tour through the piazzas and the streets of the centre with a special gaze to the monumental gates of the ancient walls or a stop in front of the Town Hall; a visit to the workshops of the mosaic artisans spread throughout the centre, as well as the Dante Alighieri Theatre and the Luigi Rasi Theatre.
Other places to see are the Garden of Forgotten Herbs, Palazzo Rasponi Dalle Teste, the Public Gardens, and further more as the Rasponi Crypt and the Roof Gardens of the “Provincia” Palace, the Brancaleone Fortress, the Basilica of San Giovanni Evangelista and the Basilica of Santa Maria in Porto Fuori. Last but not least, a walk in the City Dock (Darsena) – past and future of this wonderful city – is a good way to spend some relaxing hours. 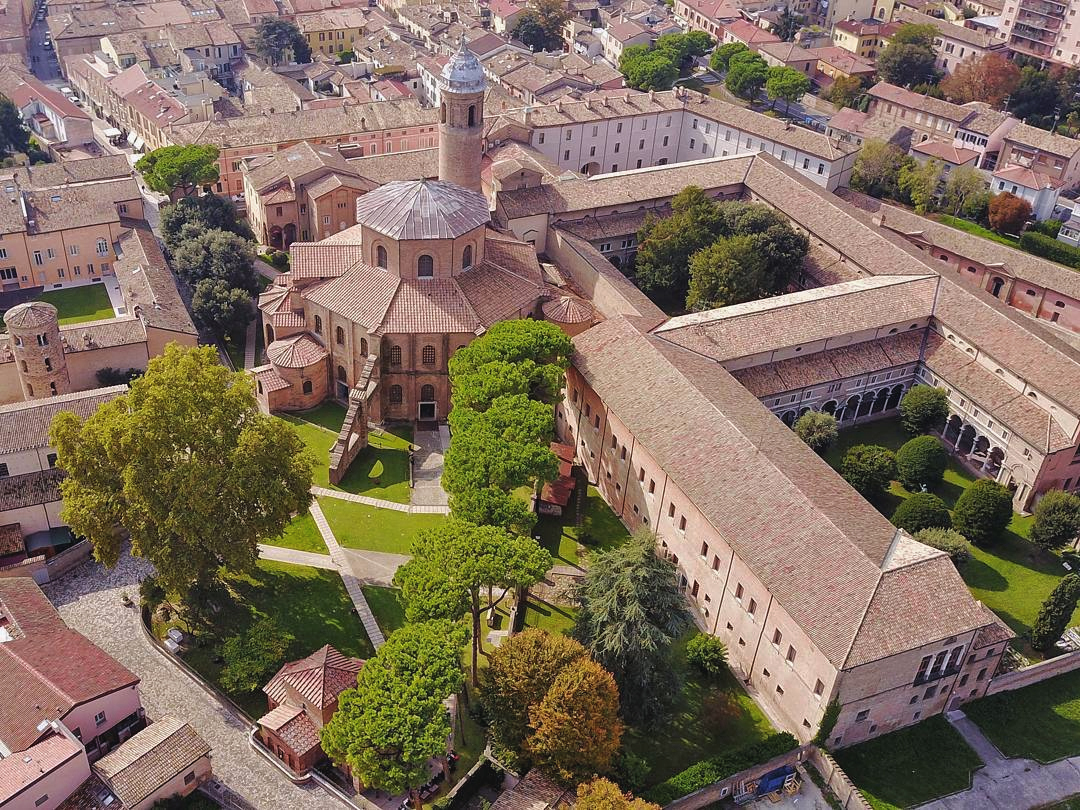 Ravenna hosts also many museums, starting from the MAR Ravenna Art Museum, that hosts several permanent collections, as well as temporary high-profile exhibitions. Moreover in the city centre are the National Museum with many artefacts of Roman, Byzantine – and not only – periods; the Tamo Museum, which offers a real tour inside the world of mosaic; the Archiepiscopal Museum with its collections, including the well-known pulpit of Massimiano, and the Chapel of Sant’Andrea; the Dante Museum, the Risorgimento Museum and the historic Museums of Marionette and of Dolls.

For all archaeological enthusiasts, you certainly cannot miss a visit to the new Classis Ravenna, inside the Archaeological Park of Classe, currently one of the most important archaeological museums in Italy, as well as a real travel backwards through the history of Ravenna.

The street museum is at your disposal, open-door and free: Ravenna collects significant street art works distributed along its streets, among them the famous Invader by the namesake French artist.

The wealth of Ravenna lies also in the beauty of its territory: it ranges far and wide a few km away from the Adriatic Sea. The Coast is dotted by nine seaside resorts, and each of them has different characteristics. Nature and hike lovers usually visit the Comacchio Valleys and the historical pinewoods of San Vitale and of Classe.
The Romanesque parish churches and the food and wine tradition of the inland are just the icing on the cake of a city where it is sweet to get lost.

HOW TO GET TO RAVENNA

Bologna’s International “Guglielmo Marconi” airport is about 90 km away from Ravenna and can be reached in 1h, also with shuttle buses or private vehicles. During the spring and summer period, a shuttle service is available: Shuttle Italy Airport.

You can access it from the A14 motorway from Bologna, where motorway 1 “del Sole”, the A21 Turin-Piacenza and the A22 from Brennero merge (www.autostrade.it). From Venice, the quickest way is driving along the trunk road SS309 “Romea” where the roads from Padova and Ferrara (SS 16 Adriatica) merge while from the South the E45 connects the city with Rome through the Apennines.

From the railway station of Ravenna, 200 metres away from the historic centre, you can reach the railway junction of Bologna in just over 1h and 20mins,  and from here connect with the rest of Italy and Europe: www.trenitalia.it

Dante Alighieri and his Ravenna