With a population that reaches 7,000 people, Pieve di Cento is one of the Italian villages that has kept its shape intact for centuries.
Due to its location halfway between the art cities of Bologna, Ferrara and Modena (no more than 35 km from the three capitals), Pieve di Cento is today a lively village full of social and cultural events that contribute to creating a great lifestyle.
It is also often mentioned with the name of “Little Bologna“, thanks to its arcades that run along all the streets of the historic center, just like in the city of Bologna.

The first traces relating to a first settlement in the area of ​​the present Pieve di Cento territory date back to the VIII and IX centuries AD.
At that time the area, like many parts of the river territory between Ferrara and Bologna, presented itself as a vast and homogeneous marshy area, rich in fishing valleys and marked by the course of the Reno river.
Pieve di Cento, as its name suggests, constituted a “Parish“, that is a territorial area subject to a church, called “Pievana” and, extremely important for its time, it was the only one to have a baptismal font.
So it was that near the place where the current Collegiate Church of Santa Maria Maggiore in Pieve di Cento stands, was built an elevated village compared to the surrounding marshes.

Land division according to the principles of “Agricultural Participation” – Ph www.partecipanzacento_it

This was the period in which the famous “Partecipanza Agraria” [literally Agricultural Participation] was born, an ancient form of collective ownership of land involved in land reclamation, which originates from the Middle Ages, still in use in Emilia and Veneto in the Polesine di Rovigo. The land that surrounded the village, in fact, was owned by the Bishop of Bologna, who granted them in usufruct to the inhabitants of Cento alone, but with two clauses: that of improving the land, and that of living there permanently. Every 29 years there was a redistribution of land between the living male children of the participating families who, if they were without heirs, would lose all rights.

When, a century later, the towns and villages began to fortify to defend themselves from barbarian incursions, the church and town were included within a fortified perimeter. Thus the center of Pieve di Cento was born, a fortified village whose parish continued to maintain its ecclesiastical and citizen supremacy compared to the nearby village of Cento.

At first under the influence of the Municipality of Bologna, in 1502 the two Centesies passed under the domination of the Estense family; they were, in fact, part of the wedding gift of Pope Alexander VI Borgia to his daughter Lucrezia, who had recently been married to Alfonso I d’Este Duke of Ferrara. When in 1598 the Este domination came to an end in 1598, the small town passed to the Papal States and became a papal possession until 1796 when Napoleon Bonaparte’s troops took possession of the village, revolutionizing ecclesiastical and civil life.

In fact, after a secular history under the dominion of the Papal State, in 1865 the Workers Society of Mutuo Soccorso was founded in Pieve di Cento, a liberal philanthropic institution that intended to supplant religious assistance initiatives and, in 1889 was founded the Mutual Cooperative Society among laborers, to give work to the farmers.

Given its long history and the many vicissitudes that took place here, the village of Pieve di Cento is a small treasure chest that still preserves the slow passage of history. There are therefore many historical and artistic emergencies that, despite the earthquake of 2012, are today almost all open and open to visitors.

First of all the majestic medieval Fortress which, located near Porta Bologna, was built following the mutual commitments between the Municipality of Bologna after the disputes of 1380. Besides the historical interest, today the Rocca is the permanent seat of the Pieve di Cento History Museum, a museum in which eight rooms tell the story of the thousand years of history: from its foundation to changes in the territory, up to those of urban planning and society.
If you want to visit the Museum of the History of Pieve di Cento, we suggest downloading the APP “Pieve Welcome” through which you will have the possibility to access the contents in the augmented reality of the Museum, in addition to knowing, even more, Pieve and its reception activities. 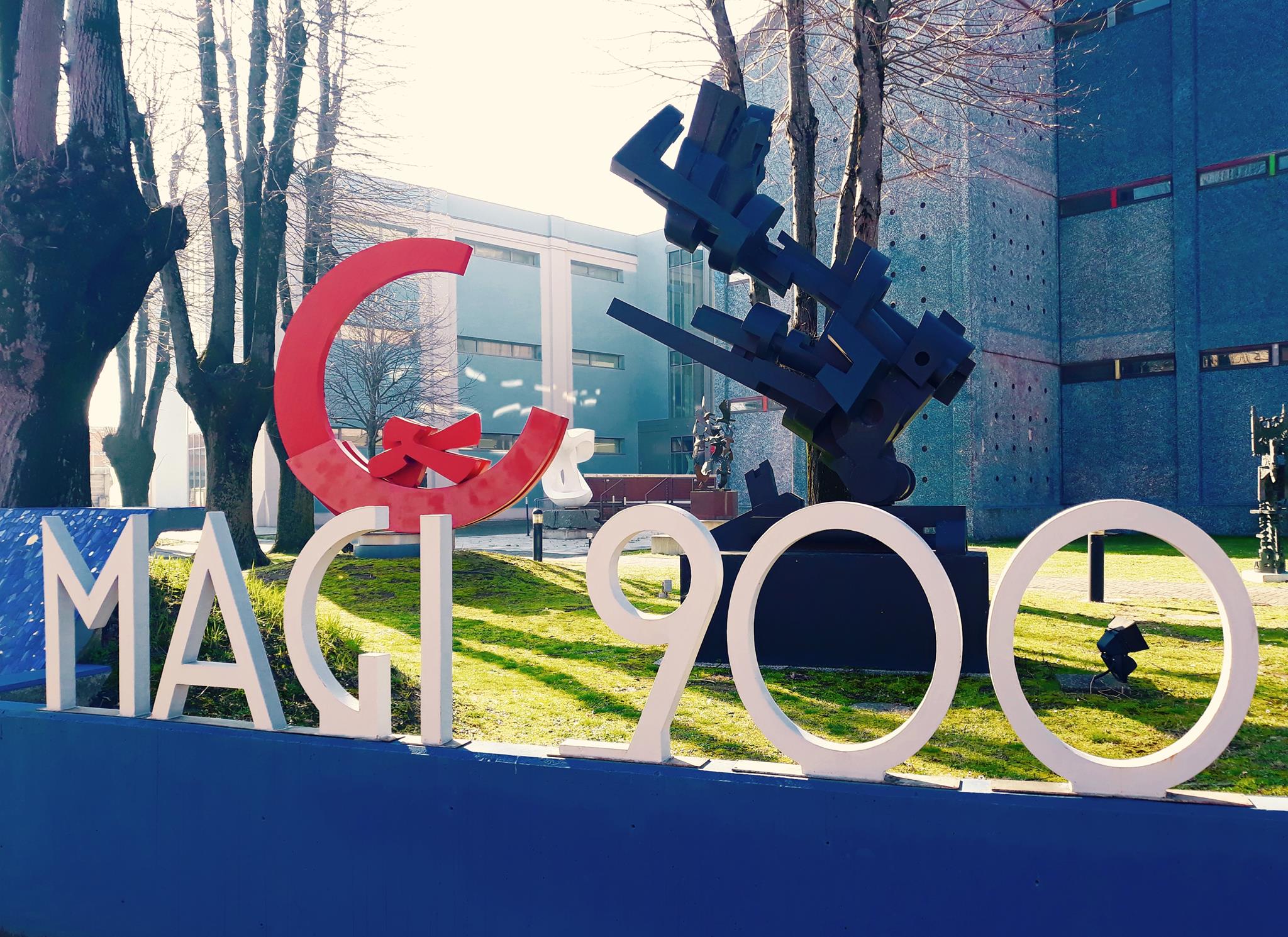 Second in order of importance is the MAGI 900 Museum, an eclectic private art museum, founded by the patron and collector Giulio Bargellini. Precisely because of its secluded position compared to the case of the cities of art, the MAGI 900 Museum was conceived as a place of contemplation and understanding of art and is situated inside a granary silo of the Thirties specially renovated and recently expanded.
The current Permanent Collection is dedicated to numerous protagonists of the movements of art and visual culture between the 20th and 21st centuries. Among the authors include masters such as Boldini, Burri, Campigli, Carrà, De Chirico, Guttuso, Ligabue, Manzoni, Modigliani, and over 2000 contemporary authors.

Not to be missed is the Collegiate Church of Santa Maria Maggiore, the ancient parish church from which it originated the entire Centopievese community, has now been reopened after the damage caused by the 2012 earthquake, allowing it to replace precious paintings by Guido Reni and Guercino.
Also on painting, we point out the Pinacoteca Civica of Pieve di Cento which, established in 1980, preserves works of the religious theme from the twelfth century, some works by the students of Guercino, united in an exhibition that illustrates the entire history of disputed painting.

If you are passionate about music and ancient music, do not miss the small Municipal Theater “Alice Zeppilli”, a typical example of “Italian theater”, the Museum of Music and the School of Violin Making, all three expressing the great importance that music plays in these areas.

Finally, don’t miss the Oratory of the Santissima Trinità, considered one of the masterpieces of the entire province of Bologna, and the brand new House of Music, a project by the Mario Cucinella architecture studio, built in the former Lamborghini area after careful reclamation of the land, according to the most careful dictates of eco-sustainable architecture.

SPRING
The Bolognese and Ferrara countryside, these are the places where you can take a bike and start running along the plains.
We are in the so-called “Po valley”, where small streets precisely follow the boundaries of the plots of land and the wheat wraps everything with its golden color.

SUMMER
An ideal stop on a hypothetical tour that connects the cities of Ferrara and Bologna. From the Este to the Bolognese arcades, you will discover the history, tradition, and customs that unite these two very different cities, all condensed in the small historic center of the village of Pieve and Cento.

AUTUMN
The best time to appreciate the museums and the local gastronomy, which here expresses the best of Bolognese and Ferrara cuisine.
And then the fog, the cold climate that encourages you to sit at the table accompanied by a nice glass of red Italian wine and a few slices of local cold cuts.

WINTER
The ideal season to appreciate the painting and the indoor places in general, which more than that means seeing great painting masters like Guercino and Guido Reni.

Sagra del Maccherone al Pettine – Month of June
A gastronomic event that celebrates the traditional striped macaroni, made strictly by hand by the “sfogline“* of the town and seasoned with sauces in different variants: bolognese ragù, ragu and peas, with ham, and vegetarian. The menu also includes second courses and traditional desserts.

* Sfogline is the traditional name for the women specialized to make the handmade pasta. Every family in Emilia-Romagna must have a “sfoglina” among its members

The typical recipes of the Pieve area are part of the Bolognese and Emilian gastronomic tradition and are mostly simple dishes, made with natural ingredients such as flour, lard, eggs, and vegetables.
The women of the family, in fact, in ancient times worked to bring out the tastes of a poor kitchen at the table, succeeding brilliantly, so much so that even today these dishes are on our tables and protagonists of village festivals.

One of the most succulent dishes is the traditional “Maccheroni al Pettine” which gave life to the village festival. To make the macaroni from the pastry, pulled strictly by hand with a rolling pin, squares are cut that are rolled up on a stick by passing them on the “comb” to give them the typical streak.
The local touristic association, which also organizes the festival, indicates the traditional Bolognese ragù (a sauce based on beef and pork with or without the addition of peas) among the appropriate seasonings for Maccheroni al Pettine; the speck sauce (with speck, zucchini and tomatoes, stir-fried with cream) or the local pievese sauce (a sort fo ragù, but made with pork cotechino).

HOW TO GET HERE

BY CAR
From Bologna, take the A13 Bologna-Padova motorway to the Altedo exit. From here take the SP1 bis to Pieve di Cento.

BY BUS
From Bologna, extra-urban line TPER Bologna Extraurbana
From the San Pietro in Casale railway station, via Cesare Battisti, lines 455 and 456

The most beautiful Italian Villages in Emilia Romagna