Grazzano Visconti: a dream village in the province of Piacenza

18 May 2021
|
By Davide Marino
You are here: Art & Culture > Villages > Grazzano Visconti: a dream village in the province of Piacenza

Grazzano Visconti: a dream village in the province of Piacenza

We have talked about it more than once and we will never stop repeating it: in Emilia-Romagna, there are loads of fascinating villages where to discover the artistic, historical, cultural and food and drink heritage of this amazing region.

From the Apennines to the coast, little centres, oftentimes unknown, are living up the wide territory: they are little jewels to photograph, witnesses of a priceless architectural and landscape heritage. Spread here and there across the territory, these little villages talk of lost suggestions. They are the guardians of the time that is passing as slow as waiting for the train to arrive in an old railway station.

Among the many villages, a special mention goes to GRAZZANO VISCONTI, in the area of Piacenza.

A BIT OF HISTORY

Grazzano Visconti is about 15 km south of Piacenza, in the Municipality of Vigolzone, along the highway SS 654.

In this territory, at the beginning of the twentieth century, Duke Giuseppe Visconti di Modrone, father of the famous filmmaker Luchino Visconti, made build, following the technical instructions of architect Alfredo Campanini (one of the main exponents of the Milan Liberty), this little village around an already existing castle.

Old documents attest the existence of a village in this area. The name “Grazzano” seems to derive from Graccus Graccianum, a local landlord.

Apparently, according to the documents, towards the end of the fourteenth century, Gian Galeazzo Visconti (lord of Milan), granted his sister Beatrice, who was already married to the noble man from Piacenza Giovanni Anguissola, the permission to build a castle in the area.

Despite a series of happenings and border fights, Giovanni Anguissola remained in charge until 1870, when, as if by destiny, the castle returned under the control of the family Visconti di Modrone.

The life of Grazzano, however, changed forever when Giovanni Visconti took it.

Who was Giovanni Visconti?

Lived between 1879 and 1941, Giovanni Visconti was an educated man with many interests. Today, we would describe him as a visionary and an curious man. He was active in many fields: he was an entrepreneur, a scholar, a hard worker and a generous philanthropist, besides being a sportsman (between 1914 and 1919 he was even president of the football club Inter).

His greatest adventure has been the village of Grazzano. Once he inherited from his father the castle at the beginning of the twentieth century, he decided to reorganize the entire property and to build a sort of neo-medieval village all around. His idea was to go and live there with his family, far from the city, farming the land and regaining the old values of craftsmanship.

With Giovanni Viscoti, the towers of the old castle gained the typical imposing aspect of the Visconti fortress. The loggias and walkways were renovated with ghibelline crenellations, while the brick façades became balanced and somber, with decorations in a Lombard taste.

In little time the village changed drastically, and from a bunch of hovels near a derelict castle it turned into a real village built according to the medieval style.

Today, it’s impossible not to be left amazed by the beauty of the village of Grazzano. The city centre has a magical atmosphere, given by the combination of the neo-medieval architecture and the attention to detail and decorations that embellish every corner, making it unique.

The boutiques and artistic workshops attract every year many tourists that come here to enjoy the village’s atmosphere and the several events, such as historical reenactments, costumed feasts or botanical festivals.

From the parish church of the Saints Cosma and Damiano to the Museum of Wax and Punishment Tools, the whole village is definitely worth a visit, if nothing else, for the frescoed façades of the little houses and the cobbled alleys. 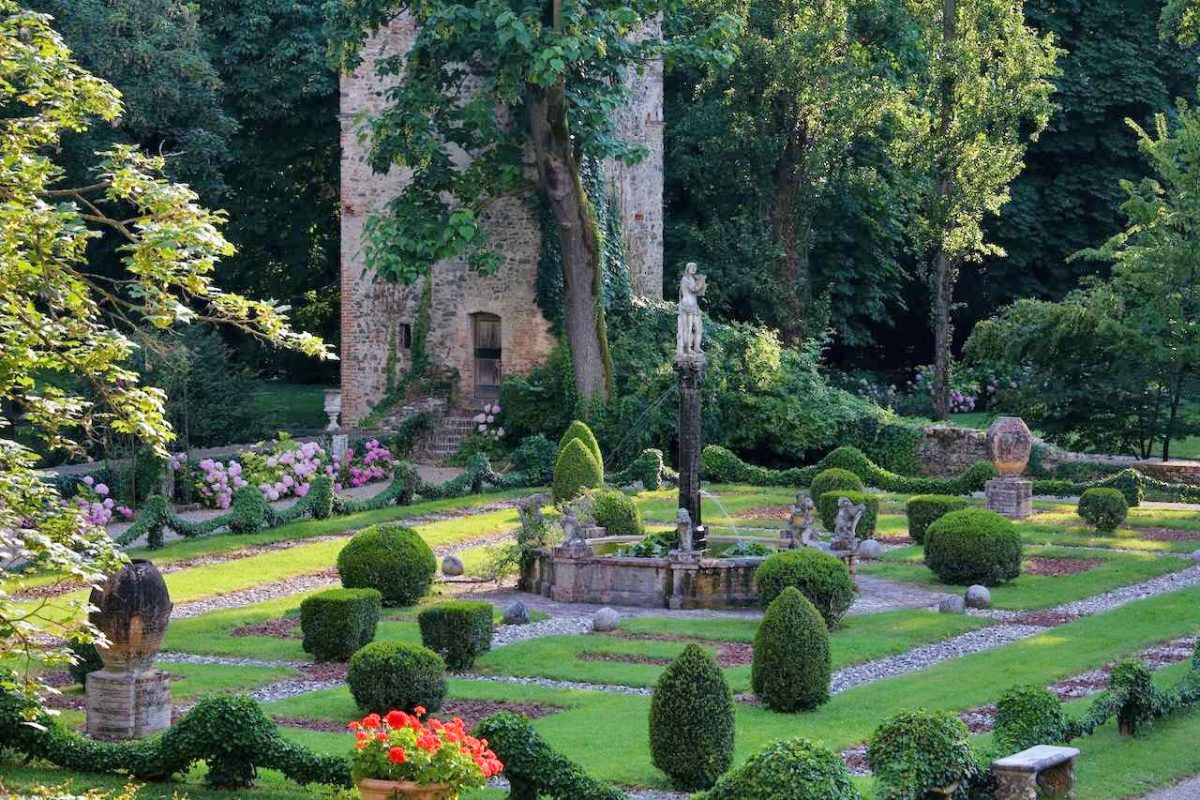 Besides the castle and its wide moat, the park attached to the building definitely deserves a visit. It is a 120,000 sqm of green, where eclectic elements that range from stylistic features of the garden in an Italian style to French and English elements mingle together.

Parterres, little bridges, fountains, statues talk about a harmonious tranquility, as do the most remote corners of the park, where you can find silence and contemplation. The sound of water resonates in the entire park, with its fountains and little moats running along the flowerbeds, near the streets or in the woods.

As every noteworthy castle, even the Castle of Grazzano has its ghost. Legend has it that the ghost of Lady Aloisa, the bride of a commander who died of grief because of her husband’s infidelity, is wandering for the park and within the walls of the castle.

Apparently, it seems that Duke Giuseppe himself (Giovanni’s father) saw her ghost, and he made a portrait of her. According to the stories, the sculptures of that painting came to life, one in particular: the statue that dominates at the centre of the park.

Historical gardens and parks in Emilia-Romagna

10 Castles of the Duchy not be missed

[Emilia Romagna Villages] Bobbio: a town of cinema and legend