Brisighella, one of the most beautiful villages in Italy

22 June 2017
|
By Davide Marino
Sei qui: Art & Culture > Villages > Brisighella, one of the most beautiful villages in Italy

Brisighella, one of the most beautiful villages in Italy

In all its mesmerizing beauty, the tiny town of Brisighella lies at the foot of the Apennines, in the River Lamone valley, close to Vena del Gesso Regional Park. The town’s silhouette is defined by three hills, each capped by a symbol of a distant but not-forgotten past: the imposing Rocca Manfrediana fortress (14th century), the Sanctuary of Our Lady of Monticino (18th century) and the clock tower (19th century). 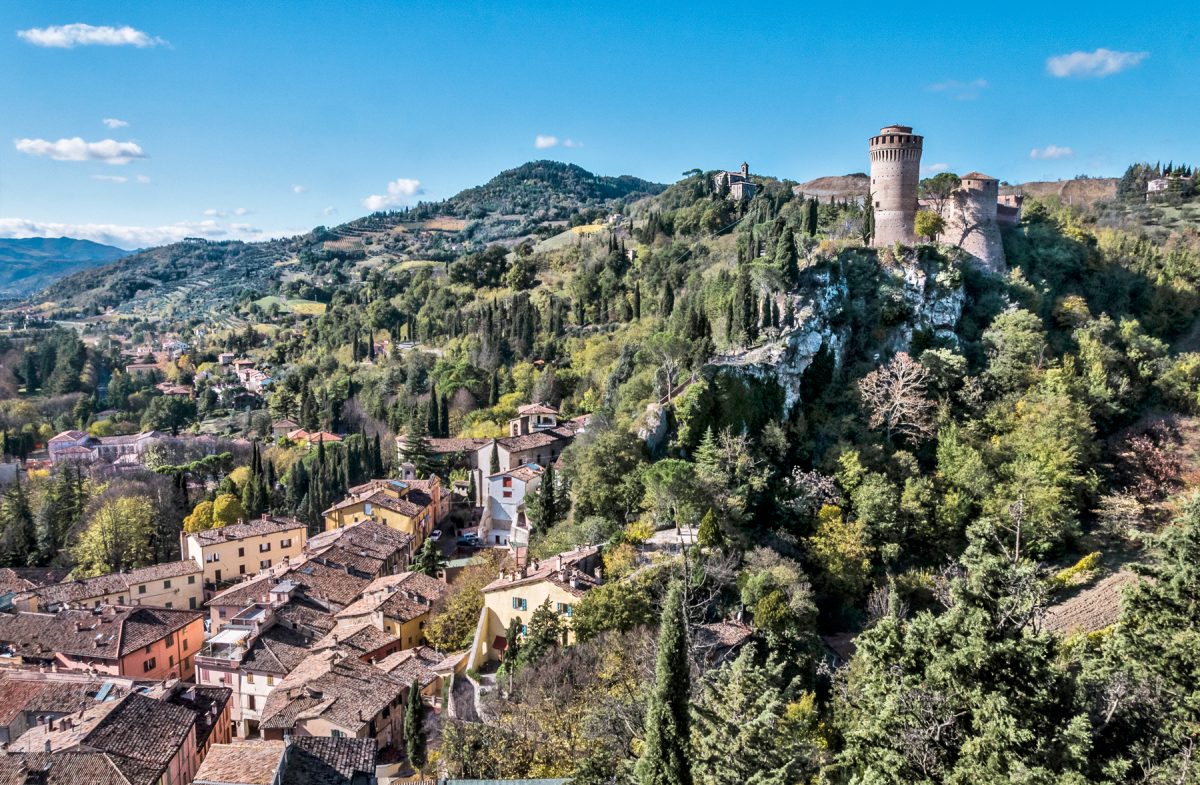 Brisighella stands midway between Ravenna and Florence, amid a beautiful panorama of fertile fields, vineyards and olive groves that exudes peace and tranquillity. It’s the perfect place to shake off the stresses of everyday life with a holiday steeped in wellness, in the spa centre just outside the old town.
Art and nature, food and wine: what more could you wish for? And indeed, Brisighella is a member of the CittàSlow and Orange Flag touring associations as well as being one of the Borghi più Belli d’Italia (the most beautiful villages in Italy).

The area’s natural beauty and strategic position have been appreciated since ancient times. The earliest settlers arrived in the Stone Age, in the Bronze Age and later in the Roman era, when the Via Faentina was built in ad 13.
In the late 13th century, political differences with the nearby city of Faenza led Maghinardo Pagani da Susinana to fortify the first of the three hills to become occupied; the clock tower was one of the structures erected. In 1310, the Manfredi family of Faenza took control of the area and built the fortress. The various phases of settlement and the need to construct defences have shaped the town as we see it today. 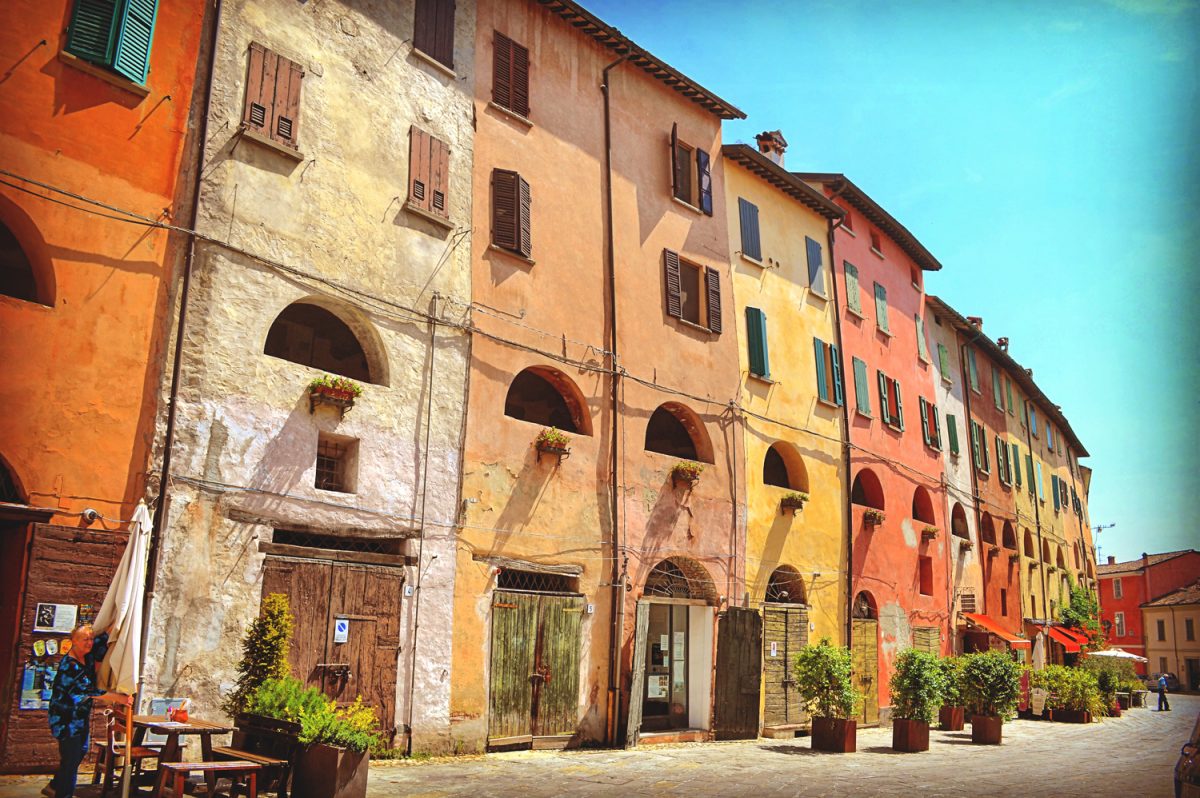 The best way to explore Brisighella is to walk through its centre. The town’s hub is Piazza Carducci, under the gaze of the church of Saint Michael and John the Baptist, with its collection of 15th- and 16th-century artworks. Continue up Via Porta Fiorentina – pausing for a spot of food shopping in the local stores – towards the neoclassical Piazza Marconi or Piazza del Municipio.

The church San Giovanni in Ottavo | Photo © ghiandol, via Flickr

The Antica Via del Borgo, or Via degli Asini, is one of the area’s loveliest features, an arched stone walkway over the façades of the houses below. Further up, Via Della Torre leads to the clock tower, while a few steps to the east, the Rocca Manfrediana fortress now houses a local history museum. The Giuseppe Ugonia Civic Museum, meanwhile, displays works by the artist and painter Giuseppe Ugonia from Faenza, who lived in Brisighella. Some of his art can also be seen in the British Museum, London.

Just outside the town, the tiny church San Giovanni in Ottavo is one of the best-preserved in the whole of Romagna; you can find it on the SS302 main road to Tuscany. Brisighella’s natural charms are best appreciated in Carnè Park, whose 170+ acres of unspoiled beauty are ideal for trekking, horse riding, and mountain biking.

SUMMER
– Explore the underground tunnels in Tanaccia cave, one of the most famous tours in Vena del Gesso park
– Take a tasting tour of the local wineries (a piadina makes a delicious accompaniment)
– Rediscover your inner equilibrium with a weekend at Brisighella spa
– Visit the archaeological site at Monte Rontana (the medieval fortress, Rontanae)
– Savour a romantic aperitif or dinner out; you’re not short of choice

WINTER
– Enjoy a romantic dinner with some fine local dishes in front of a roaring fire
– Tiptoe through the fairy-tale atmosphere as the town and nearby hills are sprinkled with snow
– Winter means Christmas, so don’t miss the traditional living nativity scene and the Christmas markets

Every year, Brisighella hosts festivals and sagre (food fairs) to celebrate and promote its culinary delights and its art, history, and architecture. On the first two weekends of July, the old centre echoes to the sounds of the Medieval festival. In late spring, too, Brisighella Romantica literally lights up the town, as tables for two line the streets and squares for a collective candlelight dinner. And early May means Borgo Indie, an intimate little festival of independent farm producers, with talks, events and tasting sessions. 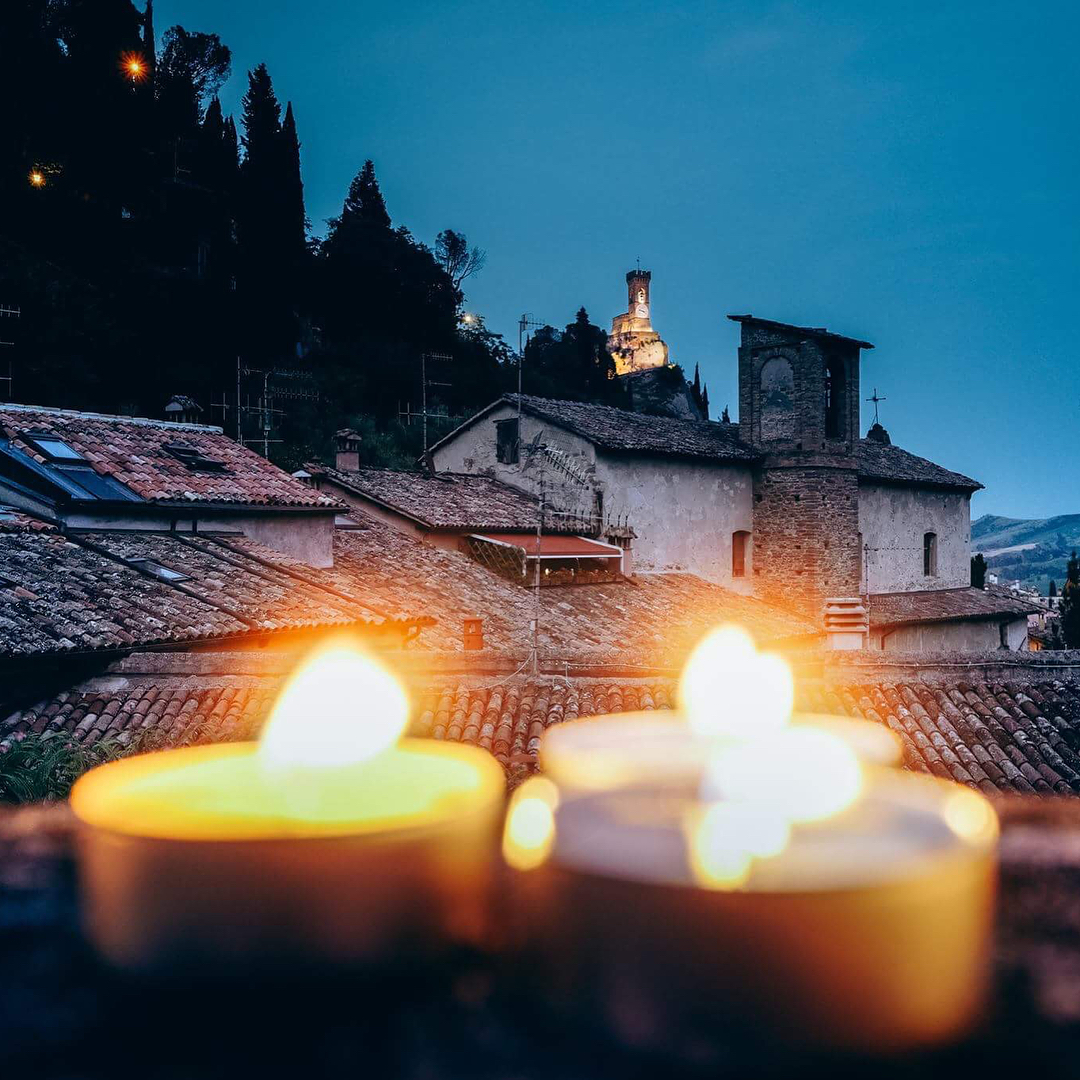 Brisighella is both an emblem of Romagna’s culinary tradition and a unique place in its own right. Down the centuries, it has jealously guarded its superb local products – like the Moretto artichoke, Brisighella extra virgin olive oil, cheese ripened in the chalk caves, Mora Romagnola pork meat, and fruits such as the Volpina pear. And there are no wines like Brisighella wines, with the Sangiovese and Albana. Both the Long Walk of Saint Anthony and Dante’s Walk pass through Brisighella.

How to reach Brisighella

Brisighella is 8 miles from the Via Aemilia and 32 miles from the Adriatic coast. It is easy to get here by train from Faenza or Florence or by car or bus on the SS302 main road.

Brisighella: a route between Nature and Archaeology

The most beautiful Italian Villages in Emilia Romagna

Journey to the Center of the Earth