The eight most beautiful cloisters in Emilia-Romagna

The eight most beautiful cloisters in Emilia-Romagna

We are so used to run all day from a place to another and to dodge the countless errands of our agendas in our life that we do not find the time to stop and listen to our body and soul.

It’s a violent routine that has always scored the time of our lives, keeping us away from our deep and ancient spiritual roots, but also from a series of important virtues, such as SILENCE.

Most of all, silence is gaining ever-growing importance these days, despite its rarity. In a world suffocated by noise, finding places that have room for intimacy, surrounded by beauty and order, becomes an opportunity to rebalance – even if for just a moment – our existence.

What could I say? The monks of the Middle Ages had already understood, building their abbeys and little cenobia with semi-closed spaces, where to find refuge and isolate from the outer world, walking, praying, meditating, and confronting each other.

Inspired by the old Roman Domus, the cloisters were an added value to the monasteries, becoming a trait d’union between the church and the other main rooms, allowing the monks not to go out and stay within the monastic complex. In this way, they had rooms that were not accessible from the outside and that no visitor could access if not allowed by the abbot rector himself.

Luckily, the situation has changed. Many of these places can be visited today, and there, inside those rooms, you can imagine and enjoy the feeling of the silence that once ruled.

The Old Franciscan Cloisters in Ravenna 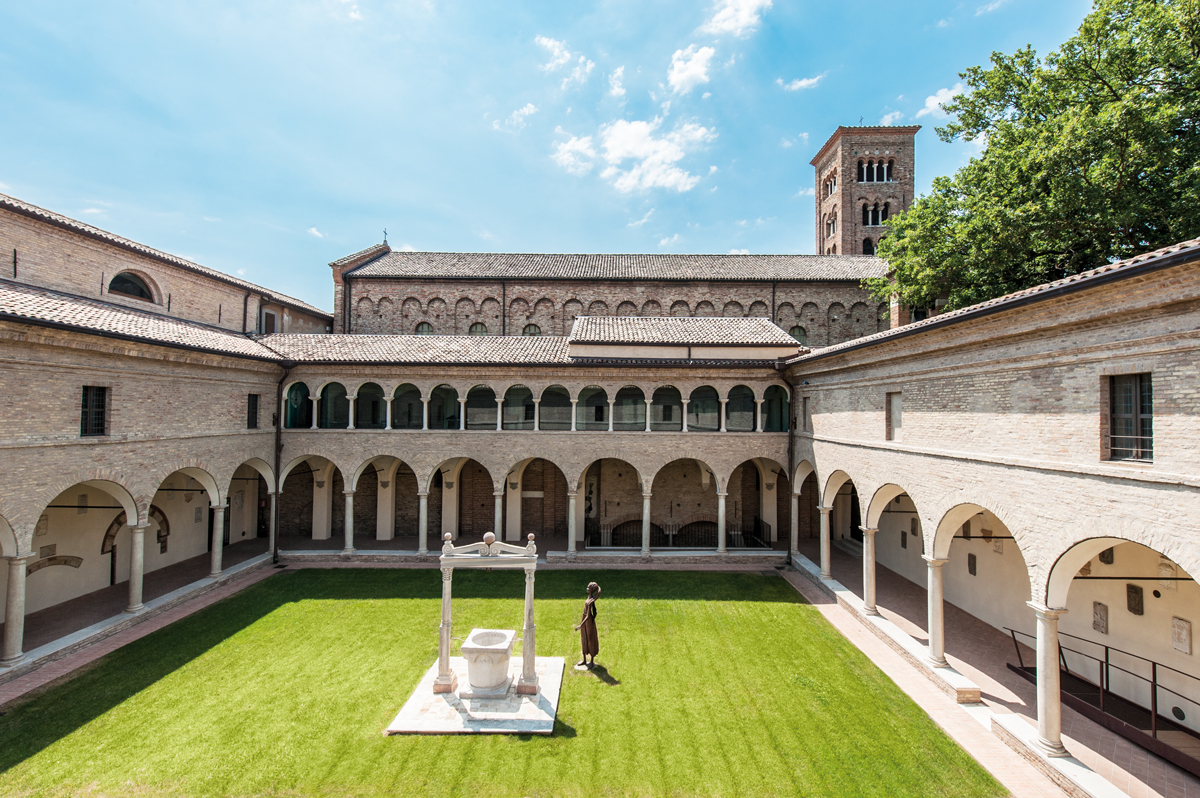 A corner of refined beauty and silence in the very historical centre awaits you in Ravenna. It is a place with a symbolic and sentimental meaning, even before being an example of art and architecture. This place is tightly linked to the figure of Dante Alighieri and his presence in this city.

The monastery was built in 1261 by the Franciscan monks, and it is next to the namesake church. A part of the building is not original but the result of a renovation work carried out between the 15th and the 17th century.

Along with Dante’s Tomb, the Basilica of San Francesco, Dante’s Museum, and the Quadrarco di Braccioforte, it composes the so-called ‘Zona del Silenzio’, an area of silence and respect dedicated to the memory of the Supreme Poet

The cloisters of the National Museum of Ravenna

Although the spaces of the old monastery of San Vitale host today the National Museum of Ravenna, the whole building preserves its original structure.

The monastery is composed of three large cloisters, of different dimensions, built between the 15th and the 16th century, which outline the rooms connecting them to one another.

The first two cloisters offer a suggestive walk, passing in front of a series of valuable archaeological findings that are on display along the hallways (sepulchral slabs and Roman and Late Antique epigraphs), making you discover something more about the history of Ravenna. During your visit, you will find even some unexpected treasures, such as the Ancient entrance of the Basilica of San Vitale

The cloister of the Abbey of Chiaravalle della Colomba (Piacenza)

Created in the 13th century, the Abbey of Chiaravalle is a real medieval jewel. All the knowledge of the time ― architecture, decorations, and mystical symbols and decorations ― contributed to the construction of this marvel.

With its squared shape, it is the only monastery in Emilia-Romagna standing in a suburban area that has remained perfectly preserved.

The quadrilateral structure built accordingly to the French fashion of the time is divided into bays with overhead cross vaults, and it features sculptures from the school of San Benedetto Antelami.

What reigns inside these rooms, what has always been the charm of the Abbey of Chiaravalle della Colomba, is silence. Attractive are also all those numerical symbols that characterize the inner architecture of the building, as well as the voices of the monks still living here that echo religious sounds.

The cloister of the Basilica of Santo Stefano in Bologna

The complex of Santo Stefano is undoubtedly the most unique complex in the entire territory of Bologna. Born from the combination of several buildings (the so-called “seven churches”), it is a real sanctuary of the local faith, built over the centuries.

Inside, many spaces are worth your attention: you cannot miss the great medieval cloister on two floors, at the end of the itinerary. It is an incredible space right in the heart of Bologna, whose lower part dates back to the year 1000, which is the base to another order built in a plain Romanesque-Gothic style.

Among the many architectural elements decorating this space, the capitals deserve some attention. Among these, two of the capitals ― one engraved with a naked man smashed by an enormous boulder and the other with a man, whose head is twisted of 180°― may have inspired Dante Alighieri. The poet, in fact, during his stay in Bologna, used to come here and meditate, and it seems that the columns gave him the inspiration for some sort of atonement he described in the Purgatorio.

The cloisters of the Basilica of San Domenico in Bologna

Considered one of the most beautiful churches in the city, the Basilica of San Domenico certainly deserves a shot if you happen to be in Bologna.

The monastery preserves the spoils of Saint Dominic de Guzmàn (1170-1221), and it is the headquarter of the Dominican Order. The amazing Gothic-Romanesque façade contrasts with the inner spaces decorated in a perfect Baroque style.

The building preserves priceless works of art by several artists, such as Guercino, Filippino Lippi, Ludovico Carracci, and Guido Reni. Among them, the Ark of Saint Dominic (1267) deserves particular attention, since it is the marble keeper of the saint’s spoils, decorated by no less than three sculptures by Michelangelo Buonarroti.

A stroll across the greenery of the great cloister offers a glimpse of the whole complex, ending the visit to this place that is the symbol of Bologna Christianity.

This enchanting place, where peace and silence reign, is on St. Francis Way, which from Rimini leads to the Sanctuary de La Verna.

The Franciscan Monastery of the Friar Minors dates presumably back to 1215, and it is considered the oldest Franciscan building in Romagna.

Legend has it that Saint Francis stayed right here, planting in the garden of the little cloister a log from which grew roots and leaves: it became a gigantic cypress, which, after more than seven hundred years, is still standing there.

The Cloisters of the Former Church of San Romano in Ferrara

If you want to know the history of the Cathedral of San Giorgio in Ferrara, you should visit the former Church of San Romano. Beyond the façade, you will find one of the most suggestive museums in the city, hidden by the hustle and bustle of everyday life, bikes running, and loads of passers-by.

The church, which was partly destroyed by an air raid during WWII, has been rebuilt soon later, trying to respect the original structure. Not to be missed is the cloister, with a sequence of columns topped by amazing capitals, the oldest of which date back to the 10th century.

The cloisters of the Abbey of Monteveglio

Some places in Emilia-Romagna give new and surprising ways to re-discover spirituality and contact with nature. One of these places is the thousand-years old Abbey of Monteveglio, built to celebrate the victory of Matilde di Canossa, who defeated Enrico IV during the fight for investiture (1075-1122).

The current building is in a Romanesque style, renovated between 1925 and 1934 with the aim of bringing it to its original splendour.

Beyond a visit to the apsis and to the crypt of the nearby church, both dating back to the 10th century, there are two very suggestive cloisters: the first is a 14th-century construction with a double gallery, the second oldest, decorated by anthropomorphic capitals dating back to the 12th century, overlooks the underlying valley.

The Abbey of San Benedetto in Alpe

The abbey of Pomposa between history and legend

Discovering some of the most beautiful Parish Churches in Emilia Romagna