Halfway between Piacenza and Parma, just a few miles from the exit Fiorenzuola and Fidenza, stands out the historical Cistercians abbey of Chiaravalle della Colomba, a remarkable proof of the monks’ presence on this territory.

We are in the heart of the Po Valley, not distant from the noisy highway Autostrada del Sole A1, where everyday cars speed up and down the lanes.
On the one hand, our attention is diverted by the deafening sound of the hustle and bustle of modern life, on the other, however, just one hundred meters or so away, the deep silence of this community of monks that still live here, inside this complex, strikes us.

As if it was a ghost, emptiness amidst the morning mist, the abbey of Chiaravalle della Colomba shows itself for what it is: an amazing work of art with deep roots in the European medieval history, perfectly in line with the most truthful and oldest monastic tradition.

It’s not by chance indeed that the abbey is part of the association “Charte européenne des Abbayes et Sites Cisterciens”, which gathers all the Cistercians of major interest, and that has even become part of two important Cultural Routes of the Council of Europe: the “Via Francigena” and the “Route Européenne des Abbayes Cicterciennes

BACK TO THE ABBEY’S ORIGINS

The first stones for the foundation of the abbey of Chiaravalle della Colomba were laid down in 1135, when San Bernando di Chiaravalle (the great reformer of the Benedictine order, from which originated in France the order of the Cistercians) welcomed the request of Arduino, bishop of Piacenza, and built a community of monks for his diocese.

On 11 April 1136, with a document called “institutionis paginam”, in order to build the monastery, Bernardo di Chiaravalle was given some lands formally lay the foundations of the future abbey.

The event was not without clamours, and what made it even more solemn was the legend that almost immediately was connected to this place: a white dove (and this is from where it gets the name “della Colomba”, mentioned even on the official papers) had been twirling in front of the bewildered eyes of the monks, pointing with some blades of straw at the spot where the future monastery should have been built. 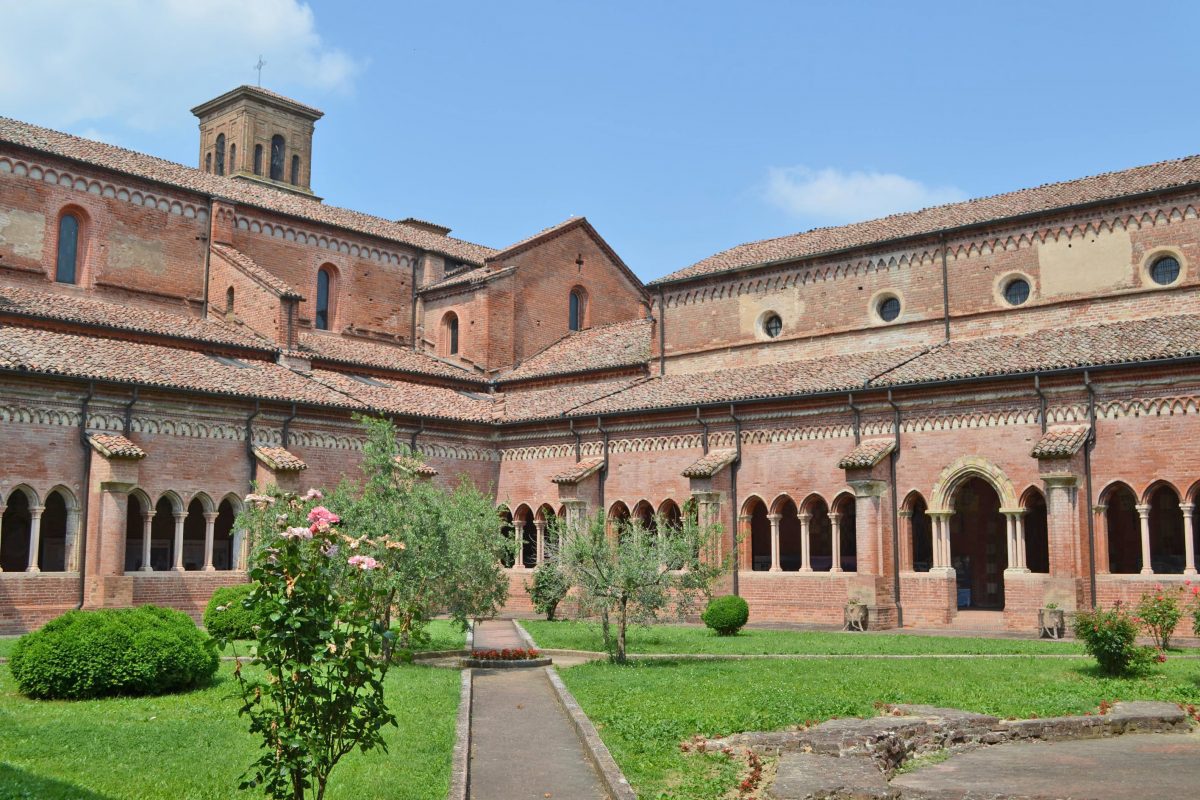 Actually, it’s more likely that the name “Santa Maria della Colomba” (original dedicatory name of the basilica and monastery) refers to the mystery of the Annunciation, harmonizing with the strong spirituality linked to the worship of the Virgin Mary, which has always marked the Cistercians communities.

Since then, up to the Napoleonic era, the existence of the monks was deeply connected with the religious and civil life, turning the abbey into a reference point for all northern Italy in little time. Faithful to the Benedictine motto “ora et labora” (pray and work), the monks reclaimed and farmed the lands, bred the animals, and continued with their studies and cultural activities, spreading their spirituality.

Even if praised for the great religious, scientific, literary, and agronomic activities, from the 14th century, the abbey started to go into decline, as it occurred to other orders. The spread of wars, the raids, the famines, and, most of all, the authority crisis with an ever-growing intrusion of other powers, led to the disruption of the religious and spiritual fabric that had nourished until then this place.

At the beginning of the 19th century, two decrees by Napoleon sentenced the life of the monastery: the archive, the library, and the furniture went lost, the thousands of hectares of land and buildings became the property of the city hospitals of Piacenza, and the monks were forced to move away. In Chiaravalle, just two religious men remained: one as a priest and the other as a teacher.

Things started to change at the beginning of the 20th century thanks to Monsignor Guglielmo Bettuzzi, the abbot and priest of Chiaravalle: He convinced the Superintendence to start the recovery works of the complex, bringing to the old beauty some pieces of art that had been forgotten, such as the Crucifixion displayed in the Sacristy.

About a century ago (1937), the monks came back within the old walls of the abbey, and every year they renew the spirituality of their cloistered life made of contemplation and hard work, including meetings, events, and conferences.

You can freely visit the abbey and the monastic complex at any moment, and you can even book a guided tour.

There are many people who come here to make travel back in time, who want to experience with their own eyes the charm of the Middle Ages. Among these, the many pilgrims from the Via Francigena always find an open door and some rest in this religious haven.

Built according to the classical Benedictine scheme adopted later by the Cistercians, a big quadrangle cloister, around which the main buildings open up, including the church oriented East-West, composes the abbey of Chiaravalle della Colomba.

This place of silence and beauty is open all year round. Maybe the most suggestive time of the year to pay a visit is from May to June, during the feast of Corpus Domini. On this occasion, visitors have the opportunity to see the so-called “infiorata”, a wonderful carpet in flower decorated with flowers, leaves, as well as holy scenes, which monks and people of the village set in the central navy of the basilica. 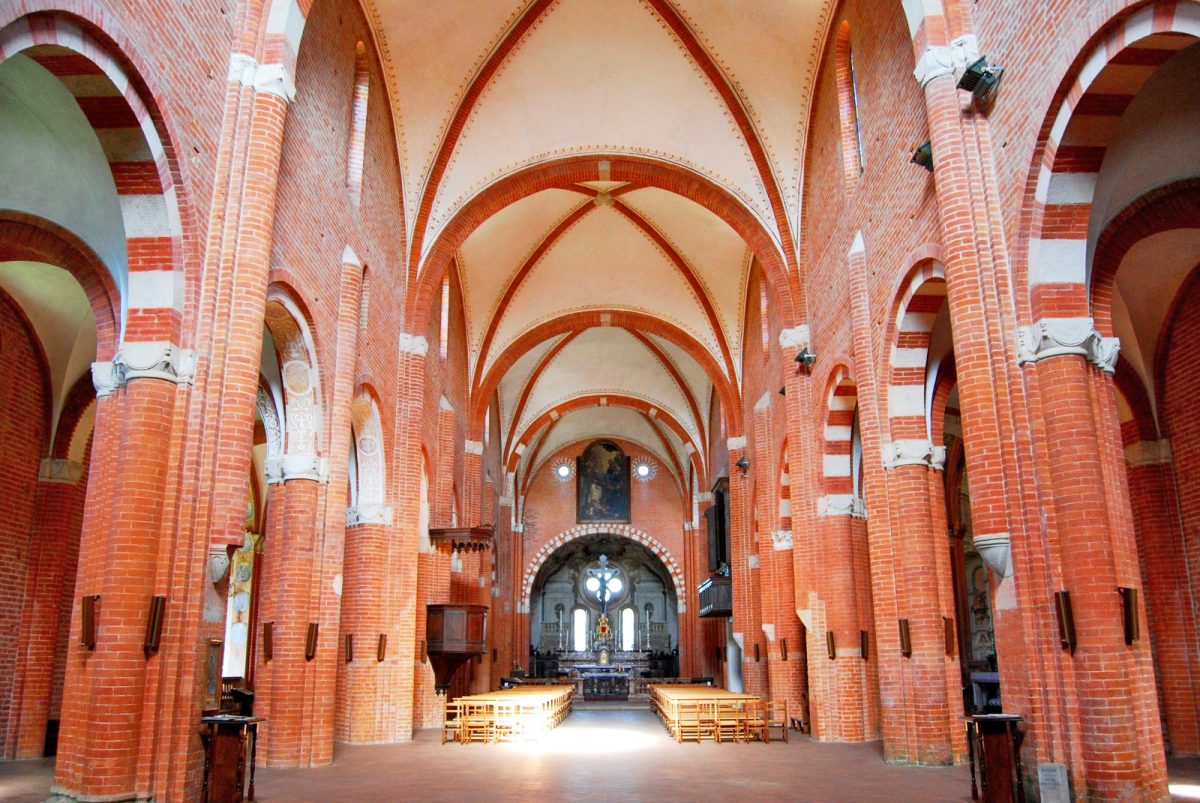 The basilica is a priceless proof of the Cistercians architecture in Italy, preserving the typical ancient Romanesque setting, but featuring also some early Gothic elements.

Built between the 12th and the 13th century and modified by later renovations, it is preceded by a vestibule, under which, next to the Romanesque gate, is a tomb – traditionally considered the sepulchre of marquis Oberto Pallavicino, the first benefactor of the abbey.

The inside perfectly respects the rules of the Cistercians architecture that requires simple volumes, selected building material, and a strict austerity as regards decorations.

Built-in the 13th century, it is the only extant cloister in Emilia Romagna that has been well-preserved despite being outside the city. The quadrangle structure has been built according to the French fashion of the time, divided into spans that are covered by cross vaults.

This real medieval jewel combines all the architectural knowledge of the time, displaying also sculptures of the school of Benedetto Antelami.

A deep silence crosses the inner spaces, fostering, even more, the charm of the places. Riddling numbers shape the architecture, with 24 four-arched windows, 85 small pointed arches, 130 pink marble columns, and 20 spurs, recalling that idea of time and spirit that was typical of the Cistercians monks.

OTHER PLACES TO VISIT

Beyond the church and the cloister, not to be missed is the room “Sala del Capitolo”, where the monks usually debate and take decisions, the parlour, the refectory, and the dormitory, which today hosts a museum dedicated to the history of the order of the Cistercians and of the abbey.

The abbey of Pomposa between history and legend

The Abbey of San Benedetto in Alpe

Discovering some of the most beautiful Parish Churches in Emilia Romagna